On November 29, 2022, seven young researchers of the UNIVERSEH alliance embraced the challenge and spoke of their research work in a short seven-minute Space Talks presentation in the “Haus der Universität”, a university event located in the city center of Düsseldorf. Researchers from the University Fédérale Toulouse Midi-Pyrénées, AGH University of Science and Technology, Luleå University of Technology, and the University of Luxembourg captured the interest of a diverse audience of students, and citizens both in-person and online. The event aimed to offer insight into the current research work in the field of space science.

The event began with a presentation by Veronika Haberle (France) who gave a lively explanation of how solar storms impact our activities on the internet (shopping, banking, etc.). Pauline Skirak and Gabriela Opiła (Poland) followed with an interesting account of their studies of meteorite samples. Their analysis of minerals and elements found in meteorites such as the “NWA 869” helped them better understand of the thermal history of the parent bodies of meteorites. Capucine Sol and Diego Sánchez De Lerín (Sweden) presented their work within the framework of the project ALMA (Atmospheric Laser Measurements of Aerosols) by building a particle counter to measure the concentration and size of aerosols. With this instrument, which is to be launched on board the balloon BEXUS 33 from SSC Esrange in Northern Sweden,  the effect of aerosols now depleting the ozone layer and putting aviation traffic at risk, can be studied. Another field of space science was presented by Jan M. Michalik (Poland). In his talk, he presented the results of studies on the presence of magnetic micro- and nanoparticles in soils and atmospheric aerosols and their effects on human health. The Space Talks ended with a presentation by Loveneesh Rana (Luxembourg) who shed light on the design of space crafts. Using the methodology of concurrent design, engineering projects of space crafts are carried out in a collaborative and interdisciplinary manner rather than a consecutive one.

These inspiring Space Talks were followed by a vivid discussion between the audience and the speakers. The evening fostered networking among young space scientists across Europe and brought citizens, students, and space researchers together. 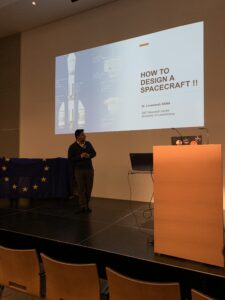 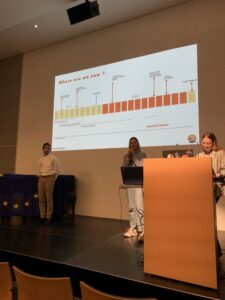